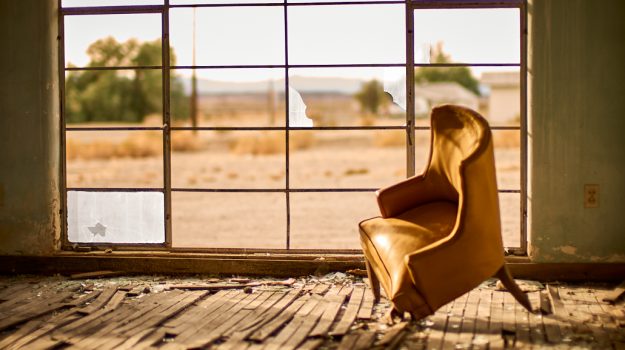 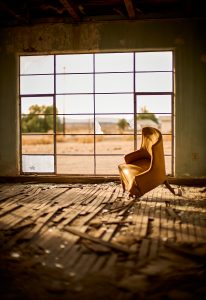 A return to California from up North this week had me working the backroads of three states since the entire West Coast is in lockdown. Empty roadways and deserted campgrounds seem to be the new normal making today’s eventual return into the deserts of southern California even more apocalyptic.

Outside 29 Palms the many roadside structures long ago abandoned due to highway diversions or bad life decisions dot the landscape giving the casual observer an insight into what this world can become with a single change in direction.

One such casualty was found just a few hundred yards off the road with nothing but empty landscape as far as the eye could see. In recent times it appears a place for teen drinking parties or a flophouse for a night or two. A more notable past might have might been a small ranch house along a thriving interstate that ran from Chicago to LA in the 40s’ ’50s and ’60s. A family living here once carving out a life with the prospect of brighter days ahead.

Wandering the blown-out structure, around every corner, a story is told in the layered walls now pealing and faded by the desert winds and heat.

It’s the history I’m after. Something the curious like to explore. Something this photographer dreams of stumbling into. 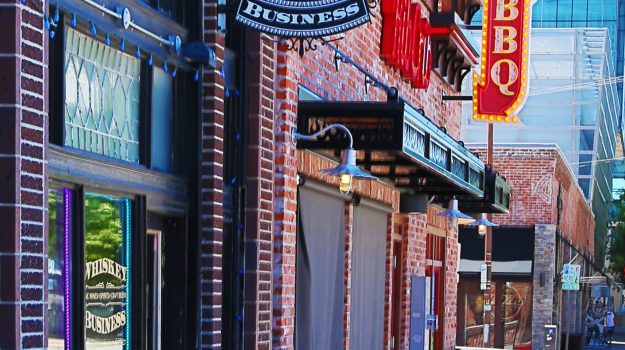 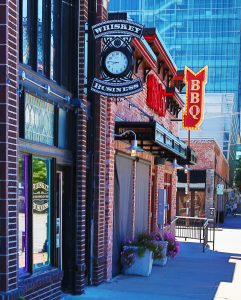 Some mornings I get up when I don’t really want to, because it is a day I have dedicated to taking pictures. I use the camera like a sketchbook, taking visual rather than written notes. Let’s just say I have my cameras trained to be ready to go when I leave. One of these mornings occurred in Tulsa, Oklahoma, getting ready to explore Route 66 with my twin brother, Tom. We went over the tour guides and internet blogs. Called The Mother Road, Route 66 enabled drivers to go from Chicago to the Santa Monica Pier on one continuous road. It is legendary. It certainly gets us up early, often before sunrise, to drive to the next shooting spot. Sometimes I feel like the photo gods are laughing at us fools running around with a bunch of gear. If the obvious scenes don’t thrill me, then I remember to look up and especially behind me. Some locations lend themselves to countless opportunities for getting unique shots. I take the location as a challenge. The area was filled with neon signs, bus stops, and people milling around. In this shot, the sign struck me as a very clever twist on words. And here I am using it in the dailyphotogame.com. As the light was changing constantly on these signs, I feel fortunate that I noticed that particular sign. Photography can definitely be risky, and sometimes, at the end of a long shooting day, whiskey business! 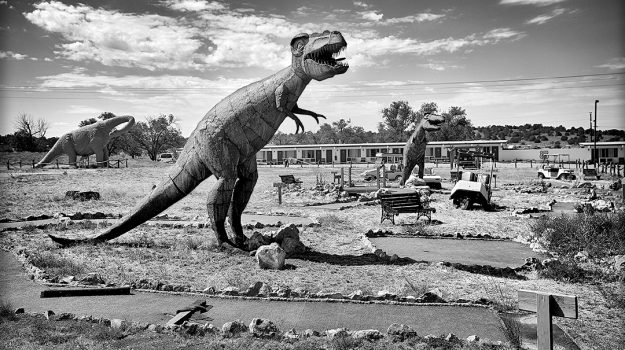 In the beginning there was the Big Bang, as one theory tells it.  Rocks and gases spewed through the universe forming stars and planets.  Gases, and hot molten rock and metals on our planet formed clouds of moisture  that eventually  filled the earth with lakes and oceans. Next came single cell life forms, then basic animal life, followed next by Dinosaurs, Man and Miniature Golf. Life was started from clouds!  So concludes, todays lesson, of Evolution!    (The book of Numbers, chapter ISO 800,  verse f5.6 in the time of 1/2500”) 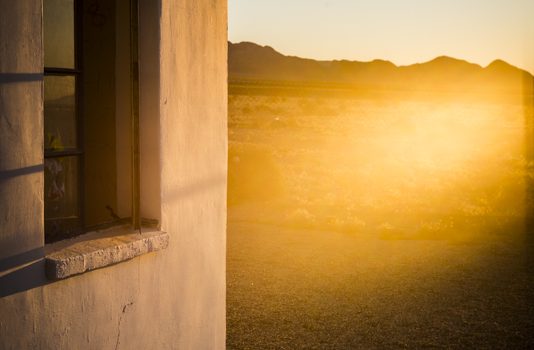 Another day spent on the road. This time a long drive from the central Idaho town of Ketchum back home to the LA basin. Thirteen hours at 10 miles over the limit speeding past the vast desert landscape of southern Idaho, Nevada, and California. The barren desert roadside occasionally dotted with homes, ranches and wayside business standing in varying degrees of disrepair. Abandoned structures sitting quietly far away from civilization. Each one an unrealized dream or business decision gone bad. Perhaps an evolving culture that no longer finds travelers plying the back roads along Route 66.

At sunset, one such deserted wayside, Amboy, CA comes into view just as the sun approaches the clean edge of the mountains at the edge of town. A row of whitewashed stucco hotel rooms sit abandoned near the road awaiting travelers that will never arrive. The doors and window glass long gone. Sand and dust covering the walls and floors as the fading sun catches every particle suspended in the still evening air.

The whole scene feels pulled from a 40’s movie complete with the sound of a distant train rumbling along just out of sight. I could spend an hour here, but only have a few minutes until the sun is gone and my journey needs to continue. A frenzied effort with more to shoot than I have time to spend. I feel like a thirsty traveler arriving at a spring. Taking more than I need and still wanting for more.

I’ll come back to this place someday when I have more freedom. The visual well is deep here and I want to linger with a camera and a fading sun again. 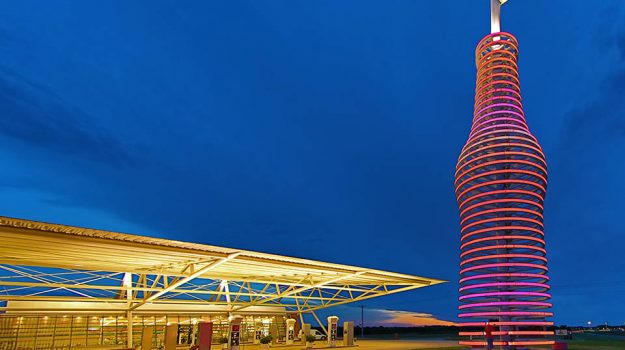 Sometimes when you are on a trip you come across really cool things unexpectedly. This place is called POPS and has over 700 varieties of bottled soft drinks for sale. I was able to shoot inside where the bottles are on display. Where this place is, pop, as in soda pop, is the regional name for soft drinks. At dusk this 65 feet high sculpture comes to life with programmed light sequences. I figured the blue hour would be the best time of day to capture the on-off movement of the lights. Different colors get chased up and down the iconic bottle. Root Beer was my drink of choice. 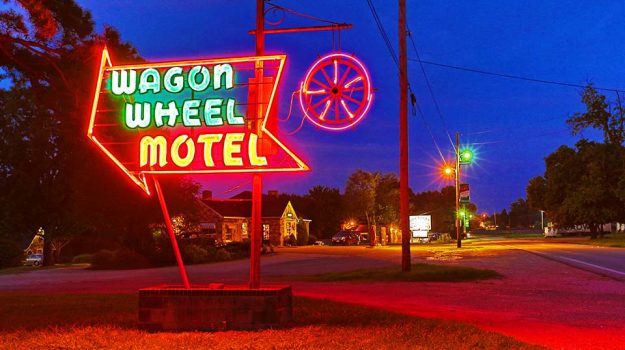 One of the reasons I am pulled towards photography is its documentary nature. I never thought of myself as a documentary photographer. Photography has always been a creative outlet whether shooting landscapes, still lifes, people or places. Preserving moments is one function that is not automatically built into your camera. You have many choices each time you press the shutter. Sometimes it is something that attracts your compositional eye, or it could be as a reference or record for your memories, often shared with others. Such is the case with this image, a classic neon sign from the 1940s along an historic road that ran in its heyday, from Chicago to LA. Route 66, now a relic of itself, a nostalgic journey of simpler times. The Santa Monica Pier is the western end of Route 66 that starts in Chicago. Today was a warm winter day in LA, only 75 degrees at the beach. Mobs of people, you’d think it was summer. This tiny Airstream trailer (8’-10’ long) sells Route 66 souvenirs and is a new addition to the pier. I liked all the red lights and the silver skin making for great reflections. I shot with my fisheye to get the interior and myself in the shot. I initially thought about doing the selfie in the ferris wheel to get a different angle on the whole beach scene. You have to know when to stop. My alternative title is 66 on 66.

This image is following David’s because of the building and the long horizontal format suggested by his landscape. I made this during my trip across country this last summer. I took inspiration from photographers like Gregory Crewdson for his slice of “somewhere America” style of directed photography. And from photographers like Kelli Connell who does mainly self portraits but plays all the parts in her constructed scenes. Mine however is a combination of a constructed and directed scene. During a light rain I stood across the street from this Meat & Grocery store and made multiple exposures of people coming and going from the store. It was a surprisingly busy store for being what felt like in the middle of nowhere. But there I was snapping away as another person would walk across my tableau and unwittingly participate in my undirected constructed photograph. Combining all these images together to make the unreal reality of multiple people at the same place at the same time in perfect step and harmony. It all seemed to come together when one chap stopped as he was walking to the door to rinse his hands in the puddle before entering. I assume he was washing something dirtier off his hands than the parking lot sledge had to offer. Blue’s image of the Route 66 sign surrounded by the bikers took me immediately to the Harley Davidson brand. In the 60’s classic film “Easy Rider”, Peter Fonda and Dennis Hopper’s characters traveled the storied highway on ‘choppers’, stripped down and modified Harleys. That movie and a couple of TV shows immortalized Route 66 and to this day people from all over the world come to ride and drive it. My friend Greg’s new HD pictured here is a far cry from the bikes in Easy Rider, but with all the chrome additions it keeps the swag alive and more. I couldn’t resist the end of Route 66 is at the Santa Monica Pier. I know tourists flock there to take photos. As luck would have it there were about 50 French Harley Club of Normandy guys wandering around. Maybe Eliot passed them along the Route. Europeans love Route 66. Looking forward to more of Eliot’s Route 66 photos.